The MAEC Museum in Cortona 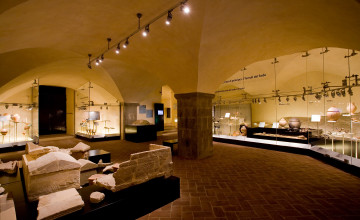 The MAEC Museum gathers in a single building the Etruscan Academy Museum and the Etruscan and Roman Museum located on the two underground floors, which were once used as a prison.

The museum is inside the imposing Palazzo Casali, also known as Palazzo Pretorio, on Piazza Signorelli, between the Town Hall and the Theatre. On the first floor, you can also find the municipal library, the library of the Etruscan Academy and the the historic archives. This palace is also hosting contemporary art exhibitions on the different rooms located on the ground floor on the right-hand side.

Bagno Vignoni is a picturesque village in Tuscany surrounded by castles and medieval villages and characterized by a big square almost entirely occupied by a spa pool. Bagno Vignoni is certainly the one of its kind in the world as it has a pool as a square.

This spa resort was also popular with the Etruscans and the Romans. Lorenzo The Magnificent used to visit the place and Pope Pio II Piccolomini wanted a villa to be built there in the mid 1400s.  This water is bicarbonate-sulphate-alkaline-earthy hyper thermal (51 °C) and flows from a spring to a huge basin built in the 1500s.

Bagno Vignoni is located in the very heart of the Val d’Orcia, near Pienza and Montalcino, in the province of Siena. This village derives its name from Vignoni, a castle that was already known in the 11th century, whose ruins are still visible on the hill over the village. Its thermal water was used even in the Roman times, as evidences by many archaeological finds displayed in the Chigi Collection in Siena, at the National Archaeological Museum.

The water flowing along the hillside of Bagno towards river Orcia was used over the centuries by old mills, which have worked until the 1950s. During the Middle Ages, Bagno Vignoni represented an important place from the economic point of view for all the inhabitants of the Val d'Orcia. This popularity was mainly due to its incessantly working watermills, which were functioning 12 months a year, rather than to its healthy spa waters.   Significant renovation works have been carried out to create an archaeological-documentary park about the watermills of Bagno Vignoni.

A cultural, food and wine tour in Tuscany is not complete without a visit to Montepulciano, a Renaissance-style town, which was certianly of Etruscan origin like the majority of the towns and villages in that area.

Montepulciano towers above the surrounding valley from a hill made of tuff along the hill ridge between Valdichiana and Val d'Orcia. It was first a medieval fortress, then a free Comune in the 13th century, but Montepulciano is commonly known as the "Pearl of the 1500s". 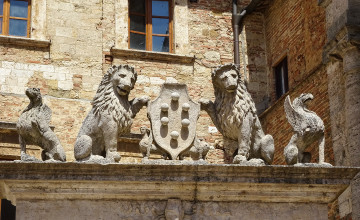 The main street, which is 1 mile long, goes from Porta al Prato to Piazza Grande, the main square where you find the Cathedral, the Town Hall and other valuable palaces of the 1500s such as Palaces Avignonesi, Cocconi, Contucci, Tarugi, Cervini, named after the most important families who lived in the town. The old quarters of the town spread around the main street.

The temple of San Biagio is very interesting as it is a real Renaissance masterpiece designed by Antonio da San Gallo il Vecchio.

Among the events in Montepulciano, one cannot miss the Bravio delle botti, which takes place on the last Sunday of August in honor of the patron saint of Montepulciano (S. Giovanni Decollato) and attracts hundreds of tourists every year. The eight quarters involved in the contest have to roll up a 80 kg barrel along the steep streets of the historic center. The first participant to reach Piazza Grande, which is located almost at the top, is awarded a prize called "panno del Bravio".

Along the road leading to Chianciano, at the foot of the Mounts of the Maddalena, four kilometer away from Montepulciano, you find the village named S. Albino. It  was famous in the ancient times for its sulfur water with great therapeutic properties, which is exploited by the Terme di Montepulciano, a modern spa specialized in the treatment of different diseases and disorders, especially in the ear, nose and throat field and in the rehabilitation field.

The history of Pienza is strictly connected to its founder, Pope Pio II, whose name was Enea Silvio Piccolomini. He was born in Pienza in 1405 in a noble family of Siena who had been forced to live in countryside because of political turmoils.

The name of Pienza was Corsignano at that time and it was a village enclosed by walls and already known in the Roman times. In ancient times this area had been chosen by early humans who left traces of their passage, mostly dating back to the Neolithic and the Bronze Age.

Enea Silvio Piccolomini, a refined humanist, decided to devote himself to the career in the church. Once elected as a Pope, he wanted a town to be built in that area to recall his papacy. Piccolomini did not want an ordinary town, rather an important and proud town that would be ideally in contrast with Siena, the other city that had unjustly kept him away. Therefore, he wanted famous architects and artists to work on this project, which would have been the expression of Italian Renaissance bearing all its construction standards and philosophical ideas. 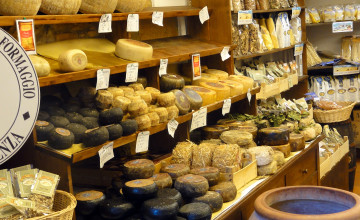 Pienza was thus built over only three years, from 1459 to 1462: the Author Town, the Ideal Town, the Visionary Town. This town "was born from a thought of love and a dream of beauty", as poet Giovanni Pascoli wrote. It is hard to tell what Pienza would have become if Pope Piccolomini had not died before a Crusade against Muslims. It was August 14th, 1464. The core of "Pio's town" and something more had already been built over three years and a half. "Corsignan de' Ladri", the border village that poet Boccaccio had already mentioned in his famous short story called "Cecco di Fortarrigo", could then change its name and look thanks to its great patron.

The majority of the relevant artistic heritage of Pienza is located on the main square dedicated to the Pope who put all his efforts to make it a great town. The square is isolated and surrounded by the four most important palaces: the Renaissance Cathedral, the Town Hall, Palazzo Borgia and Palazzo Piccolomini. The so-called Romitorio (place for meditation and prayers) is near Pienza and consists of rooms excavated in sandstone by hermit monks.

Pienza is certainly commonly acknowledged as the capital of pecorino sheep cheese. Other excellent cheese types are the pecorino delle Crete, the Marzolino and the Raviggiolo. Sheep cheese, especially the Pecorino Toscano DOP, is the jewel in the crown of dairy industry in the Sienese region. The secrets of this sheep cheese are several: it is obtained by using milk of Sardinian sheep, it is produced by using traditional methods and it is fined in terracotta vases, wrapped in walnut leaves or oak barrels.