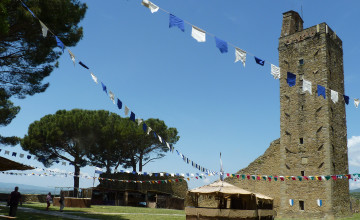 Castiglion Fiorentino, situated on a hill between Arezzo and Cortona, is a charming medieval town. The imposing tower named "Torre del Cassero" is a symbol of its past power and prestige during the 14th century.

At the foot of the tower there is a huge monumental area, which include the remains of an old castle, archaeological digs, an Etruscan museum, an art gallery displaying valuable Renaissance masterpieces, the Church of S. Angelo (11th century), old churches and the beautiful "Loggiato Vasariano", a loggia overlooking a marvelous valley, the Valle di Chio. 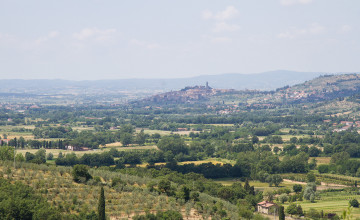 The Valle di Chio is a real gem for its nature, history and landscape. Surrounded by mountains and the hills where Castiglion Fiorentino is situated, it was once an important link between the Tyrrhenian Sea and the Adriatic Sea. Ruins of seven ancient castles, churches, monasteries and little villages prove this important past history.

It is well preserved and is characterized by the geometrical pattern of the fields interrupted by streams flowing down the mountains, terraced olive groves on the hillsides, country houses and small villages.

Apart from its local products, the Valle di Chio offers trekking routes, tracks for mountain-bike or horse riding along the endless paths leading from small villages to the mountain sides from where new horizons open up to the eye and the heart.

Our farm is situated in this valley, where old traditions and flavour can still be discovered and experienced, while surrounded by extraordinary peacefulness. Fresh air and unspoiled nature host our farm, which carry out organic farming according to the most genuine Tuscan tradition.

May is a month full of events and shows such as art exhibitions, concerts, fairs, sport contests, fun-fairs, food festivals and cultural events. The so-called “Maggio Castiglionese” aims thus at enhancing the territory. One of the most evocative moments is certainly Easter time with all its night processions during the Holy Week. On May 7th the patron saint San Michele is celebrated and the town organizes religious, cultural and food events, which end with an amazing firework show. At the end of May the quarter Cassero organizes a Medieval Festiaval to reenact the glorious past of the town and to taste traditional medieval food.

Another event that cannot be missed is the tournament called Palio dei Rioni, which takes place on the third Sunday in June, when the Madonna delle Grazie del Rivaio is celebrated. This palio is inspired by the more famous Palio di Siena and is a horse race involving the three quarters of the town (Rione Cassero, Porta Fiorentina and Porta Romana). The race is introduced by a costumed parade and flag throwers performances. The day before the event every quarter organizes a dinner to invoke victory.

At the end of September, an event called I giorni di Bacco is held along the streets of the town, where stalls propose the best local wines and the new wine to taste together with delicious bruschettas and local cold cuts.

Another attraction in Castiglion Fiorentino is the Living nativity scene, which takes place on the Sunday before Christmas and on Boxing Day along the streets of the historic center. Hundreds of people wearing period costumes and playing different characters take part in this event. Visitors can use the "denarius castiglionensis", a currency that is especially coined for the event, to buy food and beverages.